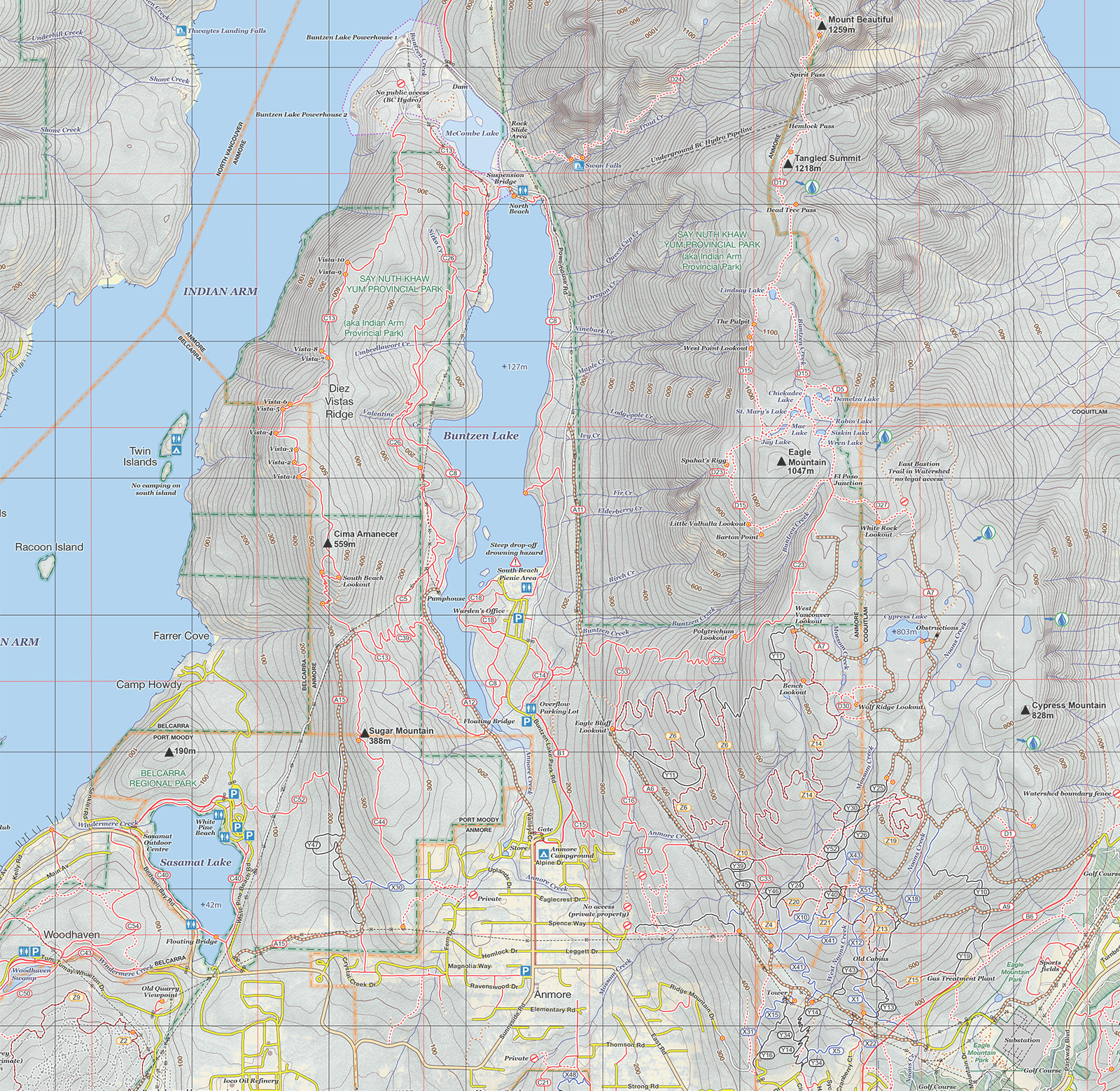 The following background information and safety advice was on the first edition of the map and is now copied here for reference. This information is not included on the second edition so as to allow more space for the map content.

Belcarra is bounded by the sea; Indian Arm to the north and west, Bedwell Bay to the east and Burrard Inlet to the south. Close proximity to the water means that many of the walks in this area offer nice views out over the water. The majority of the hikes here are in the “easy” category, with good signage and well maintained trails. The Jug Island trail leads you to an attractive viewpoint overlooking Indian Arm and the island. The Admiralty Point Trail (extending onto Burns Point) is an easy seaside stroll with frequent glimpses out over the water. Woodhaven Swamp is landlocked but offers a pretty little loop around swampland abundant with wildlife. Connecting Woodhaven to Belcarra is the Springboard Trail. This is easy graded and suitable for cycling even on a road bike. The more adventurous can explore the maze of trails in the middle of the Regional Park. This area is covered in trials bike “trails” and can be very confusing to navigate. Due to the ever changing and haphazard nature of these trails the majority of these are not shown on this map.

Sasamat Lake’s White Pine Beach is a popular destination for the young crowd during the summer months. The lake itself however offers a more peaceful loop, and a connecting trail that leads over to Woodhaven Swamp. There are several trails heading east from the lake that lead up to the slopes of Sugar Mountain. Some of these take you into Anmore, and others towards the saddle that leads down into Buntzen Lake. For those wanting to avoid the crowds, the ridge top trail on Sugar Mountain is a very pleasant amble through quiet forest. For mountain bikers, there is a nice undulating route that parallels the main Sugar Mountain Trail (mid elevation on the hill).

This is by far the most popular hiking destination in the Tri-Cities. On sunny weekend days parking can be a challenge so plan to get there early. The area is managed by BC Hydro and there is a warden’s office at the South Beach parking lot. There are a lot of trails to explore around the lake, with two easy options for circling the lake without going too high. A more strenuous option is the famous Diez Vistas hike which takes in the high level ridge to the west of the lake. There are a number of viewpoints along the way which look down on Indian Arm. Any lake loop can be extended by taking in the smaller McCombe Lake to the north. The southern portion of Buntzen has a number of shorter trails that can be combined for shorter outings. The Acadamy Trail is a pleasant route that continues from the entrance gate to half way up the lake – a good way into the area if you are without a vehicle.
Upper Eagle Ridge

The mountains to the east of Buntzen Lake rise to over 1200m, and offer serious hikes only to be attempted by fit and experienced hikers. The terrain is rough, and route finding can be an issue especially if there is snow on the ground (some years into July). There are three ways up to the ridge; the Halvor Lunden Trail, the Swan Falls Trail and the Dilly Dally Trail. All routes are steep, but Halvor Lunden is the less steep of the three. Once up on the ridge the going is tough, especially further north towards Dilly Dally. There are a number of spectacular viewpoints along the ridge rewarding the effort of getting there. To climb Dilly Dally Peak in one day by taking in the whole ridge is a major undertaking with a serious risk of being locked in the parking lot if you don’t move fast! The northern viewpoints on the Dilly Dally Trail (Croker Lookout and 157 Lookout) can be reached more easily via Bunzten Bay Road at the north end of the lake.

The lower portions of Eagle Mountain are criss-crossed by networks of trails, old logging roads and mountain bike trails. There are numerous opportunities for combining these into different outings. Noteworthy destinations include Cypress Lake, White Rock Lookout, the East Bastion Trail, Eagle Bluff Lookout and Ridge Park. Generally speaking, the mountain bike trails are steeper than the old logging roads, but provide better footing as they are not so eroded. These trails provide linkage between Bunzten, Anmore, Westwood Plateau, Upper Eagle Ridge and the edge of the Coquitlam Watershed Boundary. Bert Flinn Park and other Urban Parks Bert Flinn Park is situated at the northern end of Port Moody and borders Anmore. It offers a large network of wooded trails close to town, ideal for running or shorter hikes. There are also a number of other urban parks that span the lower regions of the Tri-Cities which link the urban areas to the higher areas. Many of the creeks have trails which run up/down. The most famous up/down trail is the Coquitlam Crunch – a good workout route with 244m of climbing and plenty of steps!

Burke Mountain lies on the southern end of Pinecone Burke Provincial Park and is bounded on the south by new housing developments. The mountain has an extensive network of hiking and mountain bike trails (of all levels of difficulty) stretching from the urban fringes up into the subalpine areas. Lyle Litzenberger’s book “Burke and Widgeon - A Hikers Guide” is an excellent resource for this area. The backbone of the trail system on the lower slopes consists of three BC Hydro gravel roads, the middle of which (Harper Road) climbs to over 1000m. All of these give convenient access to the surrounding hiking and mountain biking trails. There are several waterfalls along the paths of Pritchett and Coho Creeks, best viewed in spate conditions (but note that these same creeks can be difficult or dangerous to cross in those conditions so plan to use the bridge on the first gravel road spur during high water). Towards the top of Harper Road there used to be a small ski resort and lodge, but that burnt down and is now overgrown. There however still remain a few used cabins in that area. There are two impressive lakes on the summit plateau (Munro and Dennett) which can be reached from the lower slopes, or via a steep path that climbs up from Quarry Road to the east. Further up the mountain a trail traverses the summit ridge, eventually dropping down into Widgeon Creek. Burke Mountain’s slopes are heavily forested, but there are a number of viewpoints across the mountain which make very worthwhile objectives for day hikes.

The starting point for a trip into the Widgeon area is the campground at Widgeon Creek. This can be reached by going over the mountains via Burke Summit Ridge (a long full day’s hike) or by paddling up Widgeon Creek from Grant Narrows. There currently isn’t any access via Quarry Road which is gated and private. 3km north of the camground is Widgeon Falls. There are two ways to reach the falls – either by the main track, or via a much prettier trail that more closely follows the river. They combine to form a nice little loop. Note that the upper section of this loop is currently in the process of being rerouted (2015). Heading further north from the falls the trail leads up to Widgeon Lake. The trail is good up until the last couple of kilometers which is steep and rough. Widgeon Lake is a beautiful overnight camping destination. The remnants of the “Fools Gold Trail” leave the Widgeon Lake Trail about 4km south of the lake. This long distance path used to lead to Squamish, but is now overgrown and impassible.

This compact park just east of Quarry Road has a nice network of easy well-marked trails. The centre piece is an area of marshland which is abundant with wildlife. Bears are common in this area. The high ground that surrounds the marsh has three notable viewpoints (Low Knoll, High Knoll and Addington Lookout), the last of which gives access to the dykes and allows a Minnekhada walk to be combined with DeBoville Slough to the south (another great wildlife viewing area).

The area around Grant Narrows to the east of Pitt River is within Pitt Meadows. Here there are many kilometers of dyke paths with excellent wildlife viewing. As this area is predominantly marshland there are very few trees so views are extensive from almost anywhere along the trails. The trails are flat, wide and well marked, so this is an ideal area for novice hikers.

When venturing onto these mountains and trails it is essential to be prepared for any hazards that you might encounter. Refer to the inside cover of this map for advice on what to take and what to do.

Black Bears and (to a lesser extent) Cougars are abundant. Know what to do if you encounter a bear or cougar on the trail, and try to avoid venturing into the backcountry alone. Make plenty of noise when traveling in low visibility areas, to minimise the chance of a surprise encounter. Biting insects can be a big nuisance also, so take bug spray during the bug season. Careful attention should be paid to ticks, as these can transmit deadly infections such as Lyme disease. When traveling through any terrain where contact with the bush is possible, long pants are recommended. Check for ticks after any outdoor excursion.

Trails depicted on this map range from easy wide gravel roads through to difficult to follow steep trails with technical difficulty and exposure. Expect to encounter deadfall (fallen trees), overgrown routes with brambles, steep and slippery sections, loose rocks, uneven terrain, trip hazards, broken structures such as bridges, flooded/swampy path sections, icy surfaces, dangerous creek crossings, slippery rocks, slippery roots, slippery bridges/boardwalks and short steep scrambling sections on rock. Appropriate footwear, clothing and experience are necessary to safely negotiate these. The majority of the trails on this map are not signposted on the ground, so use this map frequently to keep track of your position. Special consideration has to be given to the snowpack. During the winter months, up to 6m of snow can accumulate on the local mountains at higher elevations. This can linger in some years into August. Snow will slow progress significantly and can obscure trail markers making navigation difficult. Soft deep snow requires snow shoes to make progress. Hard or icy snow requires crampons (or other foot traction aids) and ice axe for safe travel. Always allow extra time if a hike will take you above the snow line.

BC’s coastal mountains are situated in a “temperate rainforest”. Most of the rain falls October to March whilst the height of the summer is typically warm and dry. During the winter months heavy snow falls often at higher elevations making excursions there potentially hazardous. Temperatures can range from +33C at low elevations in the height of summer to -20C on the mountain tops during a cold spell in winter. Expect the mountain tops to be 10C colder than the lower elevations and take appropriate spare clothing. Always take rain gear as being wet is the biggest contributor to hypothermia. With appropriate waterproof clothing exploring the lower and mid elevation trails is possible throughout the year, but the higher elevations are best explored June to October after the snow has melted.